A flu shot protects you and those you love. Plus, it’s no cost for members.

Building a healthier community one crop at a time: A Q&A with Jacksonville gardener Ron Pauline 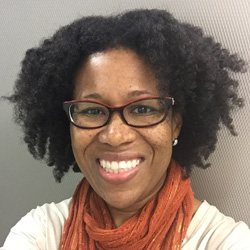 Ron Pauline walks one block from his Jacksonville home to the small Metro North Garden in the Brentwood neighborhood of Jacksonville, Florida. There, the 79-year-old community activist guides the tiny hands of local children as they explore the soil and plant the first seeds of what eventually will become a tasty snack. It’s a labor of love for Ron, who has been beautifying neighborhoods for more than seven decades, starting with his mother’s garden.

His goal is to cultivate a love of gardening — and, by extension, a love of self and community — among the children from the local daycare All About Kids Learning Center and the after-school program run by 2nd Mile Ministries.

Once harvested, the fresh produce grown in the Metro North Garden is distributed to about 70 to 75 children in the daycare or after-school program, to take home. On occasion, the kids receive lessons on nutrition and healthy eating habits from volunteers. It’s a small, but important investment in a neighborhood where 43 percent of children live below the poverty line, according to statistics from 2nd Mile Ministries, an organization funded in part by the Aetna Foundation that helps Jacksonville in a variety of ways, including bringing community gardens to the neighborhood. “It’s about building healthy families, healthy children and healthy lives,” says 2nd Mile Executive Director Jonathan Blackburn, of the effort. 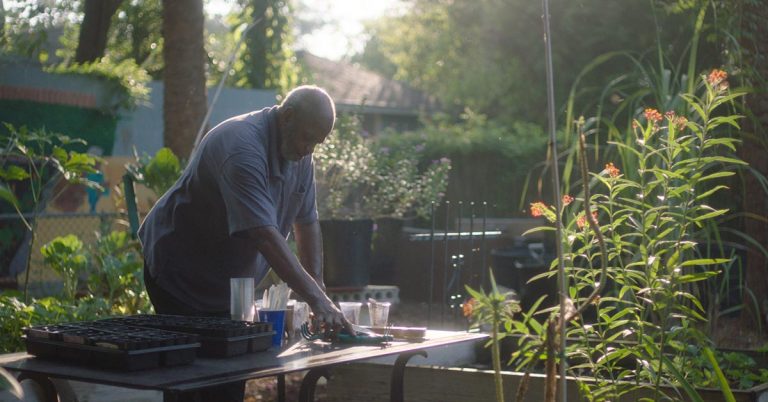 Ron Pauline tends to the community garden in Jacksonville.

Ron hopes the garden’s presence outlasts his involvement. After a decade, he’s officially passing the torch to 2nd Mile. The nonprofit organization will maintain the garden, coordinate volunteers, distribute vegetables and develop programming for local children. “It’s an immaculate place and I would like for it to be that way all along,” says Ron, who wants future volunteers to love the project — and the children — as much as he does.

Ron shares his thoughts on improving the health of future generations in Jacksonville and the next phase of his life.

Q: How did you get interested in gardening?
A: I've been around growing all my life. Starting around age 5, I had assigned duties in the yard with my mother's flower beds, and I had to keep the bamboo hedge on the side of our house trimmed perfectly. My uncle also lived on the outskirts of town, and he grew a lot of vegetables, so I helped him out. My mother and my relatives all had beautiful yards; that’s one thing I'm very, very particular about.

Q: How did a hobby become your life’s work?
A: Starting in the 1980s, I was the executive director of the Aurora St. Anthony Neighborhood Development Corporation in St. Paul, Minnesota. I did that for 20 years. We built and renovated some houses, but we were founded on helping to improve the aesthetics of the neighborhood. We created three gardens around the area on empty lots the city donated. And after eight years of lobbying, we also got the city to tear down a large theater that was a blight on the area and lease the lot to us for $1 a year. We eventually put a farmer's market on the grounds. Not only did we beautify that corner where the farmer's market was, but we beautified the neighborhood. Everybody started planting flowers in their yards.

Q: How did the Metro North Garden in Jacksonville come to fruition?
A: I was asked to start a neighborhood association when I moved back here to Jacksonville, in 2000. In the lot where our garden is now, was a house that had a fire. The city bought the lot and donated it to our group, the Metro North Community Development Corporation, where I was executive director. We started the garden in 2007. We got some money initially to do a lot of major stuff, like bringing irrigation to the site. And we’ve maintained it since then.

Q: Why invite children to work in the garden?
A: We call it a “nutritional garden” because we use it to teach adults and kids to grow food. It's a small garden. The reason I like to work with kids is because we live in such a complex society now, but a garden is very simple: Put this seed in the ground. Water it. Keep the weeds from it. And in a couple of months or so, you'll be able to eat what you’ve planted. I've been very pleased with many of the young people who have been in the program and are enthusiastic about growing crops.

Q: Do you think that you're teaching kids more than just gardening skills?
A: Oh, yeah. First of all, we're teaching patience. Nothing grows overnight. It takes a while, so you’ve got to teach them that. And the way I maintain the garden, we're teaching aesthetics. It's very, very important that you keep everything attractive, appealing. If you don't maintain the garden, it becomes an eyesore to the neighborhood. Sense of place, too, that's what we're concerned about. It's not where you live, it's how you live. Aesthetics has a lot to do with your confidence level.

Q: What results have you seen from the program?
A: Young people aren’t just doing work in the garden — now some are interested in having a little garden at home. We give them a pot so they can plant something at home and grow it. At least that way they have access to real, wholesome food and they know how to produce it.

Q. What’s your personal motto?
A: “The early bird gets the worm.” I wake up between 5 and 6 a.m. The earlier you can get somebody to meet with you, the more edge you have. If I catch you before you have that second cup of coffee, I got you right where I want you. I’ve gotten great cooperation from many city officials, vendors and residents using this tactic — people seem more receptive to new ideas early in the morning.

Q: What’s a healthy habit you’ve picked up over the years?
A: I just stick with the old school. Oftentimes in the morning, I drink a glass of vinegar and honey. It’s supposed to help with inflammation. And I do things in moderation; I haven't cut stuff out. I grew up on certain foods, and on occasion, I still eat pigs’ feet, greens and chitterlings.

Q: What’s your top priority?
A: I retired seven years ago. It's the first time in my adult life that I've had time to myself because I was always going. I wish for the rest of my life I can share all the positive experiences I've had with other people.

We take a lot of things for granted. Many of us just run in the grocery store and grab what we feel like. It's not that way for everybody, guaranteed.

Bell County, Jacksonville, is a city that's full of communities with little access to fresh food. Many people have to take three buses to just get to a grocery store.

We have a lot of walkers in our community because they don't have cars. If they can't afford a car or transportation or bus fare and it's hot in Jacksonville, and so just imagine walking three miles with like ten bags of groceries. It's difficult.

I'm Jonathan Blackburn, the executive director of Second Mile Ministries. Second Mile is a work-based organization in partnership with the Aetna Foundation that is working toward well-being in our community. The health challenges facing our community in Jacksonville Beach's area are health challenges that face all communities that live in poverty.

My name is Mary Ellen Wah and I'm the manager of both the garden and the food pantry at Beam. Beam attempts to provide healthy food to families and clients that are living on a limited income.

I've struggled with stress eating. I know to talk to some of you, we all have our days. We know that our clients are more susceptible to diseases and we know that we can affect a change in their health by providing healthy food.

Our program at the University of Florida is focused on working towards that goal by providing support for community gardens throughout the city. When people have that opportunity to grow their own food, it is empowering because there is an independence and there is a choice. When we put these gardens into the community, I see an immediate health impact.

So for about a year now, we've had our after-school program volunteering in the metro-north community garden and what we call the Healthy Habits, Healthy Kids initiative.

So you ready to get into the garden? All right, let’s do this. Being able to work in the community garden means that these kids get the exposure that they need to develop healthy habits that will carry on throughout the lifespan.

It connects all those dots so that kids have a more holistic understanding of the process that goes on with the things they put in their body. They are taking the seeds in their own hands then they're seeing this process take place.

It's not just kids that derive the health benefit from a community garden—it's their siblings, it's their parents and it's the extended community around them.

We are giving these people the tools they need to live a healthier happier life no matter where they live. There is nothing more satisfying than working with somebody and teaching them how to grow their own food. That gives them total control over their life.

Last year we produced 7,500 pounds of food and we were able to provide fresh fruits and vegetables to almost 16,000 people.

Ultimately it's something that really inspires hope. It inspires kind of this can be an attitude where people often say you can't or it won't.  It's helping to weave a story within a community and draw a community together. It's about healthy families, healthy children, and healthy lives.

Christina Joseph Robinson is a veteran editor and writer from New Jersey who still loves to read the old-fashioned newspaper. She’s raising two fruit-and-veggie loving daughters to balance all the treats Grandma sends their way. Christina’s health goal is to resume her workout routine after being sidelined by injuries.

You’re about to leave Aetna Better Health® of California

This link will take you to the Aetna Better Health® of California provider website. It contains information for health care professionals. If you don't want to leave the member site, click or tap the "x" in the upper right-hand corner.

Continue to the provider site

You’re about to leave Aetna Better Health® of California

Continue to the main site

Aetna® provides info on the next page. If you don’t want to leave our site, choose the “X” in the upper right corner to close this message. Or choose “Go on” to move forward to Aetna.com.

Go on
Opens in a new tab